Artists, Funders, and Disruption in the Public Realm

“Art in the public realm activates public space for its intended democratic purpose,” noted Anne Pasternak, former director at Creative Time and currently director at the Brooklyn Museum in an NEA interview. When artists activate the social imagination and cultural practices bring people together, when new images and events claim or create public space, and when cultural organizing mobilizes people to action, art disrupts and influences social and political dynamics and discourse in the public realm. And, when funders shape programs to support this work, they too are influencers and activists in the public realm.

As definitions of public art broaden to include social and civic practice, art in the public realm continues to recurs as a central idea and practice. The concept of the “public realm” recognizes public space as more than physical places for locating art. They are connectors that support or facilitate public life and social interaction. The Office of Public Art, Pittsburgh, addresses this in Artist Residencies in the Public Realm: A resource guide for creating residencies and fostering successful collaborations:

“The term public realm refers to the spaces within a community that are experienced by members of the public, regardless of whether they are publicly or privately owned. The public realm includes streets, outdoor spaces, hillsides, and landscapes. In addition, the public realm may include interior spaces that are open to the general public and actively used by community members, such as libraries, schools, or community centers. The public realm is also defined as the concept of the public sphere, the social space to which all citizens [residents] have access and where public opinion is formed about issues that face communities.”

In April, Americans for the Arts and The Barr Foundation released Programs Supporting Art in the Public Realm: A National Field Scan with snapshots of 28 programs supporting and building capacity for artists working in the public realm. The scan highlights how funders and cultural agencies are shaping programs to support artists for more place-specific and issue-specific work as well as cross-sector collaborations. It is also important to ask why funders are investing. And, as funders step into the public realm along with the artists they support, they must consider their own implications and risk factors, e.g. risk of “failure” on issues that have consequences; the expanded time required for funders and grantees in a learning curve for work that is new to both; and the potential to be challenged and to face challenges around inequities.

Through Creative City, Kerry Thompson offered monthly salsa in the park dance lessons to fellow DeafBlind community members through the project Movements to Move the Marginalized from the Margins. Kerry saw her project as a vehicle to promote the inclusion of marginalized communities to all arts and recreational activities. Image: Maureen White Photography

Consistent with most artist grants, public realm programs center support for artists and artist-led projects. Some are responding to artists who are increasingly pursuing social and civic practice. Others are proactive in building capacity for artists to work effectively and at a scale that can engage people and activate and enhance public space. Most programs offer project funding rather than fellowships or commissions. Several support projects as part of artist residencies. A majority prioritize aesthetic experimentation, risk, and innovation.

However, most programs identified for the scan couple their artist focus with social aims, especially cultural equity, racial equity, social cohesion, community engagement, and activation of public space. Almost two-thirds of the programs researched in the scan include requirements surrounding — or programs addressing — inclusion and equity. In fact, some are conceived specifically to address cultural and racial diversity, social inequities, or preservation of cultural traditions, as well as resourcing marginalized or under-represented groups and/or intersectional identities both from the artists/curators and the communities they serve.

When these considerations are manifest in eligibility guidelines and review criteria, funders disrupt traditional and inequitable patterns of arts support. When they prioritize and allocate resources for work in historically underserved and under-resourced communities and neighborhoods, they challenge who has agency in the public realm. When funders actively recruit artists, particularly ALAANA (African, Latinx, Asian, Arab, and Native American) artists, whose opportunity to propose and complete creative public projects is structurally limited, they are opening doors. And, when they require community partnerships and engagement practices that adhere to a “with me not for me” philosophy, funders help to expand the diversity of expressions and images in public spaces while establishing more inclusive frameworks for representation and boosting creative and community leadership in public discourse.

Of course, the artists’ projects themselves are democracy “labs” that directly and indirectly advance civic engagement and advocacy by shifting where work is being made, whose voice is being lifted or heard, what images are depicted, and what history is being highlighted in the public realm.

Both funder and artist contribute on a continuum of change or impact that leans toward social justice — structural change that increases opportunity for those who are least well off politically, economically, and socially. 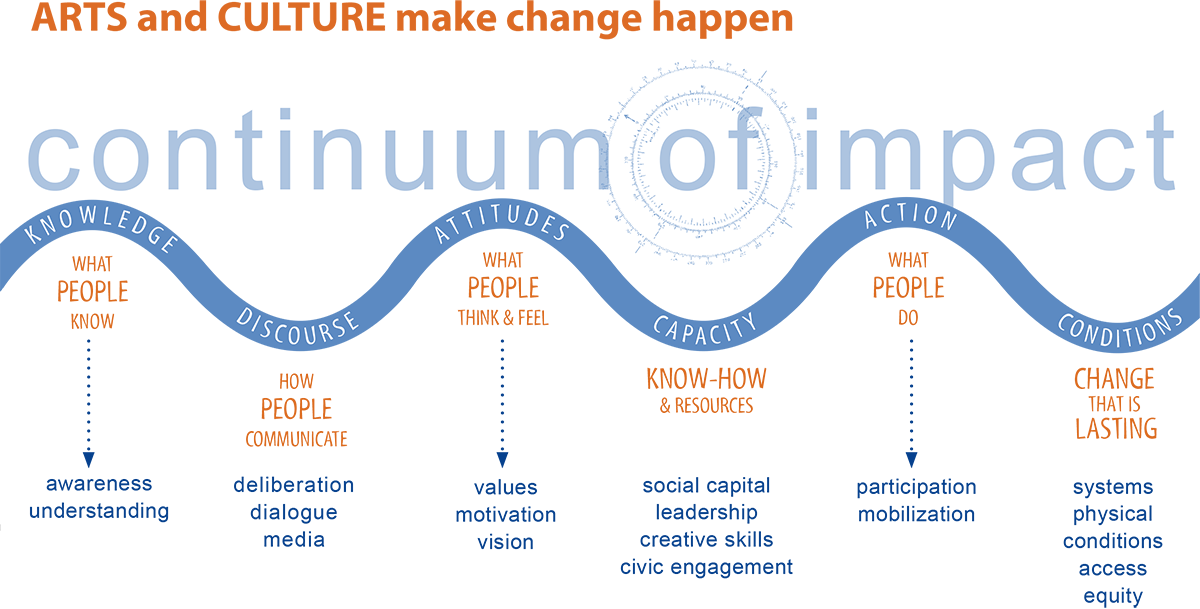 But grantmakers can go beyond funding to accelerate change by putting other assets to work that reinforce and amplify the work and value of artists in the public realm. Funders have significant spheres of influence — across sectors, with municipal and community leaders, with other funders and donors, and the media. These platforms are opportunities to project fresh narratives about the power of art for change.

The Barr Foundation has taken such steps with its investment in the New England Foundation for the Arts’ (NEFA) Creative City program. The inaugural three years of the Creative City pilot program, beginning in 2015, supported over 50 artists of all disciplines to [1] reimagine places for art in Boston, [2] engage public imagination, and [3] inspire community members to share in civic experiences. Since the Barr Foundation sees Creative City as part of a growing strategy to build support for art in the public realm, we augmented our investment with resources for documentation, evaluation, field learning, and communication.

Through a learning assessment conducted by Americans for the Arts’ Animating Democracy, which included the research for Programs Supporting Art in the Public Realm: A National Field Scan, NEFA and Barr could reflect on the impact of the program in order to evolve the model. The assessment was layered into the third year of the Creative City pilot (now relaunched as Creative City Boston) providing opportunities for both retrospective learning and first hand observation. Conceptual frameworks, such as the Aesthetic Perspectives Framework, were introduced and facilitated exchanges with NEFA staff, panelists, and grantees/artists/community partners built knowledge and broadened perspectives of how the program was making impact and what could be strengthened.

The assessment substantiated how Creative City artists and their projects created value for participants and captured the ripple effects they had. NEFA, working with a communications agency, transformed these insights into a compelling report and videos highlighting the artists and their projects. Barr supported design and video production and was able to bring journalists and media outlets to the table.

The press conference and communications strategy have helped to raise the visibility of the artists and their work and also increased the awareness and understanding of the transformative power art can play in civic life. Barr’s approach and aim is toward building the evolving field of practice around art in the public realm, specifically in Massachusetts and both internally within our field as well as among external stakeholders, influencers, and public opinion.

Artists often disrupt the public realm with a subtle, sometimes subversive hand. Their projects serve as building blocks for community change. Many accentuate the positive, the opportunity for new futures by (co) creating the public environments they want rather than responding solely in resistance to existing conditions, i.e. protests. Creative City projects were vehicles for a shared civic experience, boosting both community pride and cohesion. Some instances included: staging a salsa dance party for disabled and hearing and visually impaired folks in a public square; holding a reading at the public library by immigrant teens who participate in a writing workshop; reclaiming and repainting a footbridge with resident designs after graffiti art was painted over; creating a comedic web series with Latina protagonists and a diverse cast of characters; conducting a joyful choir of homeless and recently housed people; and lifting the narrative of the Vietnamese American diaspora experience through a collaborative, site-specific mural project.

By using their influence to create disruption in the enabling environment, funders supporting artists in the public realm can be subtle players, too. The disruption starts with rewriting the rules to shift who and what gets funded and who benefits. It includes funding at levels large enough — either because of size or number of grants — to achieve scale and critical mass that creates noticeable change. And, this may be an opportunity bring other local funders to this work. Creating a pooled fund may attract those not independently ready or without having enough resources to support this work on their own while aggregating a corpus substantial enough to fund artists adequately. Then, by lifting the work through support for evaluation, strategic communications, media alliances, and convening power, funders are able to help ensure stories of impact are shaped and shared with resonate messages for different audiences. These are all funder tools for influence. Grantmakers should use their tools to educate and advocate — here is what transformative art in the public realm looks like and what it can do.

The Creative City Report and videos can be found at: https://www.nefa.org/CreativeCityLearning. Creative City Boston was re-launched in April. Programs Supporting Art in the Public Realm: A National Field Scan was conducted to inform future directions of the New England Foundation for the Arts’ (NEFA) Creative City The scan, while not intended to be comprehensive, highlights overarching themes and offers snapshots of 28 programs supporting and building capacity for artists to work in the public realm. Detailed summaries from interviews with seven selected programs provide additional insights.  The report is available here. Additional reference: https://www.abettercity.org/assets/images/Inspirational-Ideas-for-Boston-Public-Realm.pdf.