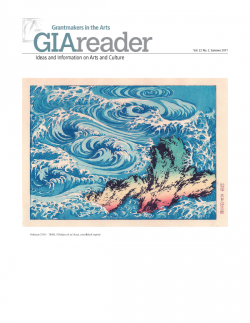 Maryo Gard Ewell worked for more than thirty years in arts administration. Her special field during most of that time was the symbiotic relationship between arts programs and community development. Since her retirement in 2003 from the Colorado Council on the Arts, she has worked as a consultant, conference organizer, and speaker in community and arts development. Ewell literally grew up in the community arts movement. She is the daughter of Robert Gard, who pioneered the NEA-funded Arts in Small Communities project in the 1960s—the NEA's first “access” grant—and authored more than forty books.

Massachusetts-based arts consultant Craig Deezen has described Maryo as “America's community arts tradition keeper. If I say she is the historian of the community arts movement, that is true, but it suggests that she's just looking back. She also is a visionary who has defined community arts development in a way that is continuously contemporary.”

Sometimes time starts for us at the moment when we grow interested in something; but it may be illuminating to take a look at what—and who—has come before us, for looking backward helps focus our thinking about the future.

Before I do that, though, let me clarify what I mean by “community arts,” a phrase that is used in so many different ways. I can't count the number of times I've been talking with someone, only to realize fifteen minutes into the conversation that we each mean something completely different by “community arts,” and we haven't been communicating at all. For the purposes of this essay, we need to clarify what it is not.

“Community arts” does not mean merely “access.” We may cry “Arts for everyone!” But it is helpful to contrast two worldviews in which “Arts for everyone!” has dramatically different meanings. In his portrait of former NEA chair Nancy Hanks, Michael Straight attributes to New Republic cofounder Herbert Croly the sentiment that “democracy was a fine idea; too fine to be left to the people.” Straight goes on to quote the findings of a panel convened by Nelson Rockefeller, which declared that the arts were “'for the many' but could not be entrusted to the many.” 1 Founder of the Wisconsin Idea Theatre, Robert E. Gard, on the other hand, contends that “in terms of American democracy, the arts are for everyone…. As America emerges into a different understanding of her strength, it becomes clear that her strength is in the people and in the places where the people live. The people, if shown the way, can create art in and of themselves.” 2

For me, the set of values Gard describes is the basis of community arts.

There are other ways in which “community arts” is used that do not apply in my exploration of the topic:

So what does the term mean? I offer this working definition: “Community art is of and by the people of a place and culture, often facilitated by a professional artist. It reflects the values, concerns, and meaning of living in that place or culture.”

Long ago, I heard Merce Cunningham speak at a conference. An audience member asked him to name his best dance. He said something like this: “Everyone's body moves in a different way. The best pieces I've done have been for a particular dancer, and while many people can dance [a piece] well, only one person can dance it almost perfectly.” There's my analogy. A given piece holds its deepest meaning for, and can best be evaluated by, the people of the community that has made that piece.

With that principle in mind, let's take a brief look at community arts in America's past. Who were some of its outstanding practitioners? Does our work today relate to what they were trying to do?

More and more, I find myself looking backward in order to look to the future. Of course things change with the eras, and the activity of today's community arts practitioners may not look much like the activities of Baker Brownell or Frederick Koch. But I'd like to invite us to ask ourselves, what are the big ideas, the through lines, that link us all together through time?

There's a good discussion for the next Grantmakers in the Arts conference, perhaps.