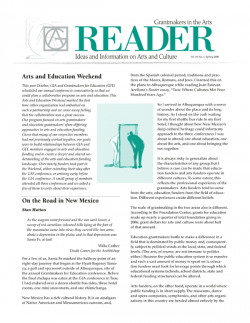 A discussion of “The Grasshopper or the Ant: A Review of Endowment Giving Policy Options,” a paper by Russell Willis Taylor that challenges assumptions, examines costs and benefits of raising and managing an endowment, and considers the capacity and expertise needed to do it well.

Is an arts organization making the best decision when it establishes an endowment fund? The short answer: It depends.

Russell Willis Taylor took on this question during a well-attended session in Taos. The talk grew out of Taylor's paper “The Grasshopper or the Ant,” written for Doris Duke Charitable Foundation Arts Program Director Ben Cameron. The paper is available on the Doris Duke web site.

Over time, endowments have served two purposes: They provide a consistent income and they ensure perpetuity. Many see endowments as adding prestige to any organization fortunate enough to have one, deriving perhaps from the belief that raising endowment funds is so difficult, it must be good to have one.

Taylor added, however, that she does not believe all endowments are bad or that foundations should not make endowment gifts. Instead, arts organizations, and the foundations that support them, should understand that establishing an endowment is a strategic decision that should fit the nonprofit's mission.

To illustrate this, Taylor pointed to two environmental organizations—The Trust for Public Land and the Nature Conservancy. TPL does not maintain an endowment because its mission is to acquire as much land as possible as soon as possible. It is a good bet that today's land prices will be lower than next year's, so using its money to buy land now rather than later is a better fit with TPL's mission. The Nature Conservancy's mission, on the other hand, is to acquire AND preserve land, so it maintains an endowment, one of the largest in the environmental field, by setting aside 20 percent of money raised to use toward stewardship of the land acquired.

Liquid cash reserves may be a better option than a restricted endowment. Taylor cited the example of NYU. The university raised $2 billion and spent 85 percent of the money to upgrade its faculty and academic reputation.

Questions to be answered before establishing an endowment fund:

A board-designated endowment fund often is a better option because the assets can be used when cash is needed. These funds, naturally, are not as attractive to donors who are seeking perpetuity. Also, endowments can be structured—one-third donor-restricted, one-third board-restricted, and one-third cash reserves. An endowment fund is a good place to park windfall gifts from bequests and planned giving programs.

How should a program officer reply to the often-heard plea “if we only had an endowment”?

“Ask them to finish the sentence,” Taylor said. “If you only had an endowment, what then?”