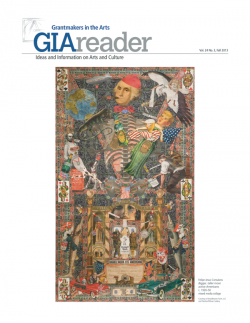 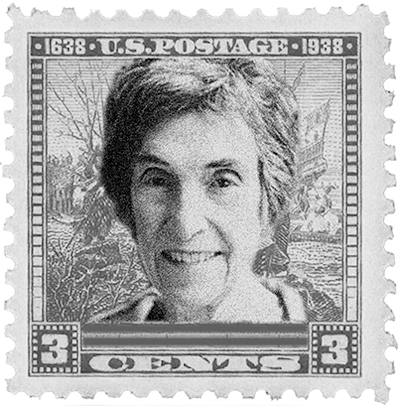 I became a foundation program officer after having been the president of Chatham College in Pittsburgh. Heading a college was important and daunting work. I learned about philanthropy, of course, because I had to raise funds for Chatham. I also focused on building the basic infrastructure for the arts at the college, among other priorities. I saw how the arts inspired our students and built community.

My own background was in the humanities, but when I was approached by the Rockefeller Foundation for a humanities position I really responded when it was suggested that the arts and humanities might be combined. That was interesting to me because, through my work at Chatham, I had deepened my interest in the arts and had come to see them as a means of changing society.

Howard Klein was the longtime director of the arts at Rockefeller prior to my arrival. He was an exceedingly inventive program officer, an interrupter, an interventionist. What he did on behalf of individual artists is the most important part of his legacy. He found ways of incorporating artists into the work of institutions, inspiring a movement of new talent into opera, orchestra, dance, and other fields. I became Howard’s boss when the arts and humanities were combined at Rockefeller, but his way of working really influenced me and influenced the programs of the combined division.

Working together, the arts and humanities staff at Rockefeller was able to position culture as more central to the foundation’s work than it had been. We made stronger arguments for the disciplines and worked more imaginatively with other divisions within the foundation. Our presentations to the board were compelling, and as a result our budgets grew each year. When Peter Goldmark became president of Rockefeller, he expanded our division’s work globally, as was the case in the other, science-based divisions of the foundation.

I had the great good fortune to work with wonderful people, such as Suzanne Sato, Steve Lavine, Joan Shikegawa, Tomás Ybarra-Frausto. They were profoundly committed and capable of very high-quality work and argumentation. That was essential because the board and other officers expected to be very involved in what we were doing. We took them to visit libraries and see artists in their studios and in performance, staged theater presentations at foundation gatherings, and brought scholars to speak. The overall philosophy of the foundation was to understand a field deeply and dig in for the long term. The board and the president really understood the importance of culture at that time.

I think the work we did to press forward fresh and diverse talent, especially from underacknowledged communities, has had lasting effects on the field. Orchestras and museums have relationships with living artists now, for instance, but that wasn’t true earlier. With the Mexican government, we funded Splendors of Thirty Centuries, the vast exhibition of Mexican art, at the Metropolitan Museum and other sites around the country. It was the first time Mexican culture had been recognized at this level in the United States. We worked to inspire dance companies to look at contemporary choreographers; now most modern and ballet companies do new work regularly.

The most important work we did in the humanities was to support the work of scholars who were challenging traditional academic disciplines. We supported new work in women’s studies and immigration studies, gay and lesbian studies, African American, Native American, Hispanic American studies, history of medicine, regional studies, many of the newer fields and subfields in the humanities disciplines. We helped build the scholarship and supported faculty. We convened the leaders in these fields and built up laboratories of the work. We sustained these lines of work long enough to make a difference.

As I look forward, I would counsel grantmakers to think more about tracking ideas and issues as they are addressed across the field. We don’t learn enough from our own history, from each other, about how philanthropy has addressed problems and found opportunities over time. I think research is more important than the field acknowledges. Grantmakers need to gather clear and useful information about what is going on in the field at a given time and use that information to combine and strengthen efforts.

As a funder, I tried to be careful and conscientious, but inevitably there is something arbitrary about grantmaking. I always tried to be sensitive to the fact that we were privileging some people when there were lots of other hardworking, worthy, creative individuals we didn’t fund. We should be careful not to overprivilege those we do fund and be respectful of those we decline. We need to have processes that are open and involve practitioners in our decision making. We need to talk and relate to a wide range of people, whether we are funding them or not. Being a funder is itself a privilege — it is important to remember that our responsibility is to others.

There is still so much to do! Having broken some barriers and opened some doorways, it seems to me that our present challenge in the arts, and in arts philanthropy, is to identify the America we’re all living in as a place where difference matters positively, and to show all the ways in which we can deal with that fact creatively.

Alberta Arthurs is a consultant with Arthurs.US, New York.