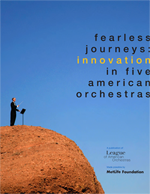 Fearless Journeys: Innovation in Five American Orchestras is the report of a 2009 study, funded by MetLife Foundation, which explored and documented five examples of promising innovative practices in American orchestras. This is the first formal attempt to define and to understand the organizational factors that support innovation in orchestras. This information is critical for orchestra leaders; it also documents an increasing resilience in the orchestra field as a whole.

Methodology of the Study

Organizational psychologist Dr. Lela Tepavac of Fit Leadership LLC created a conceptual framework for the research based on a review of existing innovation literature, innovation models in other industries, and interviews with experts in the orchestra field. Concurrently, the League of American Orchestras asked member orchestras to describe their innovative activities across a variety of areas. From among the 150 responses, the League selected five orchestras to participate.

Faced with financial challenges and widespread disaffection among constituents, the ASO built a collaborative, cross-constituent organizational culture that eliminates silos and increases synergy.

The opening of Walt Disney Hall provided leverage to open the orchestra's "high art" doors to a wider public, focusing on a commitment to contemporary music and creative interdisciplinary projects.

The MSO responded to a severely declining audience and revenue base and increasing community irrelevance by embracing a new mission of public citizenship, building artistically engaging community partnerships that use musicians' artistic talents and leadership to serve community needs.

With a goal of building its strength as a leading chamber music orchestra, the SPCO vested decision-making power in musicians and replaced the music director with a rotating team of Artistic Partners.

The analysis of data from the five studies revealed six factors common to all the organizations that had nurtured innovation: