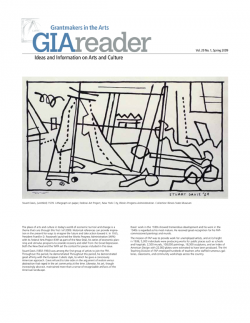 How Can the Arts Become Central?

In the past two years, several prominent foundations at national, regional, and local levels have appointed new presidents. Such leadership transitions are likely to increase in the years ahead in keeping with the larger generational shift in the nonprofit sector. Very few of the new foundation leaders are likely to come from the arts sector, and many will have had little direct experience with our field.

To learn about what inspires these new leaders about their foundations' arts grantmaking and where they see connections between the arts and their foundations' larger missions, GIA member Janet Sarbaugh (the Heinz Endowments) organized a session with three new foundation presidents at GIA's 2008 conference in Atlanta. As facilitator, Holly Sidford (former GIA member, now president, Helicon Collaborative) guided a conversation with Philip Henderson, president, Surdna Foundation; Peter Hutchinson, president, the Bush Foundation; and Robert Vagt, president, the Heinz Endowments.

To start, each of the three made a few opening comments, and the conversation proceeded from there.

Describing the strategic planning process the Bush Foundation has just completed, Peter Hutchinson started by telling a story about his visit to the Minneapolis Art Institute with his fourth-grade daughter. She took him to see an Impressionist painting, instructing him to close his eyes as he entered the room. She led him very close to the painting and told him to open his eyes. “What do you see?” “Lots and lots of dots.” Then she had him close his eyes again and she backed him up fifteen steps. “Open your eyes and now what do you see?” “Boats!”

We are the greatest dot-producing organizations in the world, he said. We process hundreds of letters, grant requests, contracts, etc. But what difference do we want to make and is all our dot-production helping us do that? This is the question the Bush Foundation asked itself. What difference do we want to make? The Bush Foundation, Hutchinson said, “is moving out of the dot business; we're after more swishes now.” After much debate and discussion, the Foundation is focused on three themes and intends to work assiduously on them for ten years, bending procedures and policies in ways that improve the likelihood of making a difference. “We're in uncharted water, but I have a picture of that painting of boats by Paul Signac in my office.”

Philip Henderson began by saying that he didn't start with a predisposition to the arts. Instead, it seemed as though “the arts were over here, and everything else was over here.” A question is how can the arts become central. What is their relevance? How do we speak to people about them? The Surdna Foundation's strategic challenge is how to overcome the silo-ed, separated nature of the foundation's programs and find a unifying purpose for all they do. The programs are all excellent, but they are not connected; each has a sense of its own door. “We have determined,” he said, “that we want to focus on vibrant, sustainable communities and that we will use the strategies of economic and community development, environmental health, and culture to achieve this end.”

As Robert Vagt sees it, the arts community has a significant inferiority complex that is unjustified. Arts organizations are defensive and arts program officers can be as well, constantly justifying their worth and special value, but from a fairly narrow perspective. As a result of this (or maybe because of it), the arts sector has segregated itself from other sectors and from the great issues of our day and of our communities. The more we weave arts into everything else the better we'll be, he said. The defensive position needs to change, because as one of his mentors used to say, “If you're 'splainin', you're not gainin'.”

One of the Bush Foundation's three “goals for a decade” is that by 2018, “we'll be part of a community that is effectively solving its problems and improving its quality of life.” The foundation intends not just to be reactive, but to work with communities to figure out how to do this, and the relationship between the foundation and its partners is apt to change. A sign of the shift is that the foundation has adopted a ten-year payout schedule in part because it recognizes that until now the community has been taking the investment risk. The cultural sector is perhaps unique because unlike many other fields its large foundations often also have large endowments.

The state of the economy, as much as could be understood in October 2008, was a powerful reference point for the conversation. Beyond knowing that the impact would be serious, little was known about the scope or depth of the crisis. There is a sense, Henderson said, that foundations will need to coordinate on “winners and losers” and that we will be part of a natural selection process. We're heading into rough water economically. Everyone should be expecting cuts; it's not a time for business as usual.

At the same time, “this environment is a lay-up for the arts,” Hutchinson said. “In times of uncertainty and stress, we need connection with others, we need events and activities that built trust and hope and confidence. We need to examine our souls, we need to resist demagogues. This is the territory of the arts. If we miss this opportunity to serve the people during a time of grave economic instability, we will be making a serious mistake with long-term consequences.”

The place and role of the arts in communities and in our civil society has not been clearly articulated, suggested Henderson. This is a clear need, especially right now. Making connections between the arts and other concerns is important, and there is a renewed appetite for collaboration. “How can we counter the sense of cultural specialization?” asked Vagt. “And how can we deal with the nature of dialogue in this country now? A feel-good movie, that might have worked in the '30s, is not what we need today.”

As the conversation shifted to involve the audience, self-criticism emerged. “The arts are still perceived as elitist and we're doing it to ourselves.” “The enemy now is us.” “Many in the arts are complicit in the schism between rich and poor.” “Perhaps humility is a good starting point.”

At the same time, though, the discussion included references to the role of the arts and opportunities for their contributions. “September 11 proved that the arts offer consolation and healing.” “The arts should be strong partners in new programs of national service, as proposed by [then presidential candidate] Barack Obama.” “Small arts groups tend to know what they're about and can hang on through tough times.” “Trust has been in decline. If people can no longer trust church, government, businesswho can they trust?”

Another of the Bush Foundation's goals for a decade, Hutchinson said, is supporting the self-determination of Native nations. “Sovereignty is a three-legged stool,” he said, “involving assets, rights, and culture. Nation-building is like dancing, and we'll dance when the people are ready, at the speed they want to dance, and without impatience.” Vagt agreed that the role of arts and culture in nation-building in Native American communities is clear. “But that role,” he added, “extends well beyond Native communities. Everyone in this room is involved in nation-building, or should be. How will arts organizations and foundations funding the arts fulfill this role?” Our societies need new imagination; the arts should be there.