A Report to The Kresge Foundation 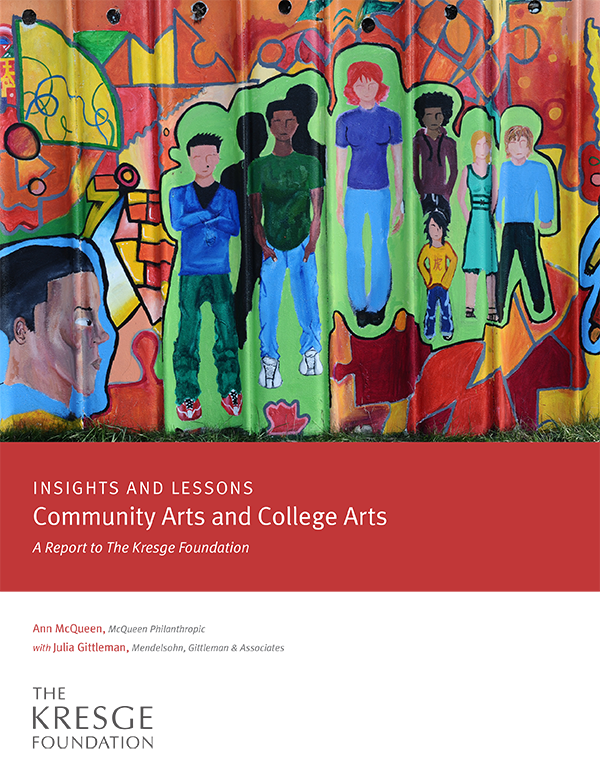 The Kresge Foundation was poised to respond quickly and creatively to the 2008 economic downturn. A year earlier, it had begun to move beyond its well-known facilities — capital challenge grants — to focus on strategic interests in arts and culture, education, environment, health and human services and the community development in Detroit. As the recession took hold and the team for each of these programs developed its approach to grantmaking, the national Arts and Culture Program launched two pilot initiatives to “challenge communities to use art and culture as a tool to address broader community issues in some of America’s most neglected urban neighborhoods.”

The foundation saw the two pilots — Community Arts and College Arts — as learning initiatives that would enable staff to experiment with a different kind of grantmaking. The initiatives would also test the assumption that the arts can address society’s pressing issues, transform communities and lift spirits during an economic downturn. While many local funders have deep experience in community arts, it was new territory for Kresge’s Arts and Culture Program.

In March 2010, Kresge invited 15 college and universities with established community programs to apply for two-year grants of $200,000. In June the foundation made awards to eight college/community programs, including the College for Creative Studies’ Community+Public Arts: Detroit. Kresge hoped to impact student training and encourage a broader application of best practices. The foundation also hoped that its grant, which required that the college or university conduct an evaluation and match its award, would result in a deeper learning and commitment to these programs.

This analysis is qualitative. Anticipating both success and failure, The Kresge Foundation didn’t seek an evaluation. As the Community Arts and College Arts pilots ended, foundation staff asked:

Finally, while this inquiry was not specifically about organizational capacity, sustainability or the mechanics of grantmaking, Kresge staff sought lessons there, too.

The authors gathered information from proposals, midterm and final reports, internal staff documents, project evaluations, websites, cultural plans and 71 interviews with project participants. The project directors in each city or university selected the nonprofit leaders to be interviewed and where those conversations would take place. Thus, the study is based in conversations with those who are directly involved and self-interested. All interviews included similar baseline questions, but with each follow-up question, the discussion took on a direction unique to that particular
person or place.

Information gathering was unavoidably limited. A wealth of data and other research on each of the five cities and eight colleges remained unexamined. For example, the fiscal health of the intermediaries or key grantees, a key measure of capacity and sustainability, was not considered in depth. And the time to delve into each place, person and project was both limited and limiting. Nonetheless, the resulting report and case studies — 13 variations on the theme of art-based civic dialogue and community revitalization — yield a number of insights and lessons.