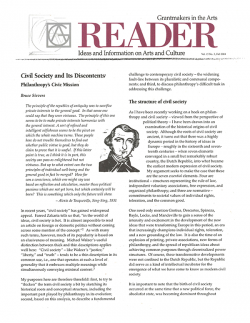 The Chicago Dance Mapping Project (CDMP) was conducted by Dance/USA over a period of eighteen months through 2002 "to capture a census of dance activity" in the six counties of the greater Chicago metropolitan area. Although the research coincided with the San Francisco and Washington, D.C. needs assessments described in the winter 2004 (Vol. 15, No. 1) Reader, the Chicago research was even more broadly inclusive of diverse dance entities and was originally intended to be reported and used as a database. The full CDMP database is hosted by the Chicago Dance and Music Alliance and is ready for use at www.chicagoperformances.org (click on Dance Mapping Data, and scroll down to Download the Data). In June 2004 with the support of the Chicago Community Trust, Dance/USA issued A Benchmark Study 2002 as a digest of some of the key findings of the 2002 Chicago dance community census. [The report will be available in 2005 in downloadable format at www.danceusa.org/facts_figures/chicago.htm.]

Dance/USA Executive Director Andrea Snyder comments, "The key concept was to include not just dance companies, but as many aspects of dance as could be researched... These included dance-makers, presenters, facilities, sources for dance instruction," as well as colleges and K-12 schools with dance curricula. As a census, rather than a needs assessment or a study of dance companies per se, writer/researcher John Munger emphasizes that, "The CDMP is a tool, not a final result." It does not have a predetermined structure, nor does it lead to a small number of specific findings. Further, "the data does not explain its own causes and consequences." Rather the information can be mined in ways that are of interest to artists, administrators, journalists, scholars, policy-makers and yes, funders.

Of the 1,233 dance-related entities surveyed, 258 were identified as "dance-makers," but within that term, the CDMP strove for inclusivity, identifying eight different organizational categories, which constitute a useful formulation for the dance community going forward. These are: 501(c)(3) corporation; community-based group; children/student ensemble; collectives and collaborations; pick-up companies; avocational/recreational ensembles; program or division of a larger institution; for-profit corporation; and other structures. This organizational mapping is one of several useful categories of analysis described in the report.

Another basis for comparison was genre, which compared dance genres (modern, ballet, culturally specific, sacred/liturgical, and other) with a variety of factors, including longevity, budget size, number of dancers, number of performances, total audience, number of paid personnel, and performance reach (local, state-wide, national, or international). In contrast to the Washington, D.C. dance needs assessment, which focused on the disconnect between the perceptual and the actual, this report maps the data according to geography, dance genre, the audience served, the artists, and gender.

A benchmark study sets the baseline for the future research, so surprises or unexpected findings are less likely. Among numerous reminders that were "ah-ha's" for me, however, were: the identification of an active and growing sacred/liturgical dance sector; the notion of grouping ballet and culturally-specific dance together under the rubric of "traditional" to observe that "traditional" companies tend to be larger and older; the previously-accepted criteria for "professionalism" that exclude too many serious artists; and the fact that dance-makers are nomads even within their own city. Not surprising is that dance artists approach their craft with a combination of "passion" for the work and "belligerence" for the difficulty of pursuing their passion.

Whether real or hoped for, a needs assessment implies an intention to follow through on one or more of the "findings." The beauty and challenge of a census, however, is that the data can be analyzed and arranged in a variety of formats. It falls to all dance activists - practitioners, policy makers, researchers, and donors - to mine the data for jewels of information that will save the art form from the "poverty and marginalization" belied by 2.2 million dance attendees each year.

Suzanne Sato is a board member, National Video Resources, Inc.