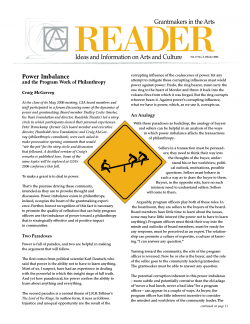 You might have been following the debate about “net neutrality” — the principle that data is delivered over the Internet indiscriminately, regardless of how or by whom it is delivered. Net Neutrality has existed as a concept since the beginning of the Internet but is in the news now in response to proposals that would allow telecommunication companies to control content in unprecedented ways. Telephone companies, of course, have long been prohibited from discriminating against the content offered over their basic tele-phone connections. But those prohibitions do not apply to cable and other broadband telcoms.

So what does this mean? According to the Consumers Union, web sites and content providers already pay for bandwidth, but now they might also be compelled to pay extra to get priority. In theory, each telcom would be able to promote or demote traffic as it saw fit.

Until summer 2005, big telephone and cable companies that own broadband Internet lines were prohibited from blocking or impairing your access to any Internet-based information or services you wanted -- or to use the techie term: to operate their network in a “neutral” manner, without favoring some content and services over others. Those rules had been in place since the birth of the Internet and helped foster the explosive growth of competitive, innovative online services.

Unfortunately, all that has changed. Last year the Federal Communications Commission wiped those rules off the books, giving big telco and cable companies the right to be the gatekeepers to the Internet. Today, there is nothing to stop these giant companies from blocking your access to any web site or online services you choose or from creating toll lanes on the Internet that restrict the ability of online service and information providers from reaching you.

Save the Internet Campaign
Taking this a little farther is “Net Neutrality 101,” a fact sheet from Save the Internet, a “grassroots alliance of organizations, citizens, businesses and bloggers that have banded together to protect Internet freedom.”

The biggest cable and telephone companies would like to charge money for smooth access to web sites, for speed to run applications, and for permission to plug in devices. These network giants believe they should be able to charge web site operators, application providers, and device manufacturers for the right to use the network. Those who don't make a deal and pay up will experience discrimination: their sites won't load as quickly, their applications and devices won't work as well. Without legal protection, consumers could find that a network operator has blocked the web site of a competitor, or slowed it down so much that it's unusable.

The network owners say they want a “tiered” Internet. If you pay to get in the top tier, your site and your service will run fast. If you don't, you'll be in the slow lane.

Discrimination: The Internet was designed as an open medium. The fundamental idea on the Internet since its inception is that every web site, every feature, and every service should be treated exactly the same. That's how bloggers can compete with CNN or USA Today for readers. That's how up-and-coming musicians can build underground audiences before they get their first top-40 single. That's why, when you use a search engine, you see a hit list of the sites that are the closest match to your request — not those who paid the most to reach you. This discrimination endangers our basic Internet freedoms.

Double-dipping: Traditionally, network owners have built a business model by charging consumers for access. Now they want to charge you for access to the network, and then charge you again for the things you do while you're online. They may not charge you directly via pay-per-view web sites. But they will charge all the service providers you use — who will pass those costs along to you in the form of price hikes or new charges to view content.

Stifling innovation: Net Neutrality ensures that innovators can start small and dream big about being the next EBay or Google with-out facing insurmountable hurdles. Unless we preserve Net Neutrality, startups and entrepreneurs will be muscled out of the market-place by big corporations that pay for a top spot on the web. On a tiered Internet controlled by the phone and cable companies, only their own content and services — or those offered by corporate partners who pony up enough “protection money” — will enjoy life in the fast lane.

Parul Desai
Impact on independent artists
Parul Desai, assistant director of Media Access Project and an owner of Propa Gandaz Music Group, an independent record label, puts the concern in the context of artists who use the Internet in an article published June 1, 2006, by VoxUnion Media titled, “How Independent Artists Could Lose their Independent Internet.”

The Internet has become an extremely cost-effective way for independent artists (and when I say “artists,” I mean that in the broadest sense, so it includes DJs, musicians, producers, actors, etc.) to get their music and creativity out to the masses. Hitting the pavement and word of mouth have always been an option. But in recent times, the Internet has allowed independent artists, with no major label support or monetary resources, to reach an audience, establish a following, and even sell records with some success.

These days, artists with broadband access to the Internet can reach millions of people and possibly develop a cult following. Artists do this by creating their own web sites or posting their talent on other web sites, such as MySpace.com.

We as users have also benefited, having to rely less on what radio and television stations decide. Instead, if we are unimpressed by (or just plain old tired of) the music we are hearing on the radio or the videos we are watching on TV, we can turn to the Internet to find a different variety of artists. We instantly can log-on to any site, no matter who owns or hosts the site, and watch, listen to, or download whatever tune catches our ears or eyes.

This could drastically change. The beauty of the Internet right now is that no matter who they are, artists have a cost-effective way to get their talent and message to Internet users. And the users can get to the artists' talent and message. But, without Net Neutrality, artists may no longer be able to reach their fans and other Internet users unless they have the money to pay the Internet service provider.

Future of Music Coalition
In an opinion piece (June 13, 2006) for The Hill, the newspaper for and about the U.S. Congress, Jenny Toomey and Michael Bracy of Future of Music Coalition, drew connections between Net Neutrality, the independent music community, radio, and media consolidation. Some GIA members may remember Toomey from an energetic session at GIA's 2005 conference in Pasadena.

Over the past several years, the independent music community has flourished. It now represents over 80 percent of music released in this country and nearly 30 percent of the overall music marketplace. That's no surprise to those who have been living at the intersection of music and technology. While many argue that the Internet has had a negative impact on traditional record sales, it has also helped artists to tear down the walls between themselves and their fans and created the foundation for an unparalleled musician-powered renaissance.

If this transformation continues, musicians may leave behind the long-standing imbalance that requires them to sign away their copyrights as a condition of gaining a major-label contract. If they do so, artists' gratitude should flow to the principle of Network Neutrality.

For musicians, Net Neutrality means they should have the unfettered ability to make their work available to potential fans without undue interference from corporate gatekeepers. Similarly, music fans should have the ability to access this music via a range of legitimate business models. Net Neutrality also ensures the continued innovation that has spurred the growth of the indie sector, the transition to a legitimate digital economy and, more widely, consumer adaptation of broadband services.

To understand the importance of Net Neutrality for artists, look at the lack of a similar principle in modern commercial radio. When informally polled as to why they sign away their copyrights to major labels, most artists explain that they need to be on a major label in order to have a shot at commercial radio airplay. And, sadly, these artists have a point.

Whether it's an outgrowth of the massive consolidation of the radio industry and the resulting loss of localism, the payola being investigated by New York state Attorney General Eliot Spitzer and the Federal Communications Commission (FCC), or simply com-mercial radio ignoring the independent sector for its own business purposes (or, most likely, a combination of all three factors), music released by independent labels is virtually absent from commercial airwaves. Further, entire genres of music, including, jazz, classical, bluegrass, gospel, big band, and folk, are increasingly absent from the dial.

What can we learn from this? Most obviously we learn that concentrated control of valuable pipelines — the AM and FM spectrum — leaves them vulnerable to corruption, particularly when huge sums of money are at stake. No wonder musicians are so concerned about an Internet without Net Neutrality.

Additional resources
The complete article or more information about each of the quoted sources is available on the following web sites.

• “Keeping the Internet Open,” from hearusnow, a project of the Consumers Union.