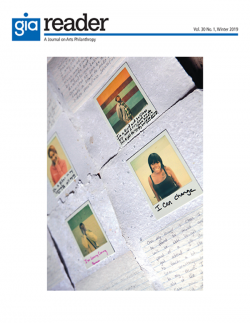 Who Chooses the Choosers?

Having worked with panels since my first job in philanthropy at the National Endowment for the Arts, thirty years ago, I am always interested in learning more about how to make the panel system better. Discussions about process, scoring systems, panel adjudication methods, conflict of interest, panel recruitment, multistep review processes, criteria, and more are infinitely fascinating to me and at the heart of improving our own work at the Jerome Foundation.

We find panels deeply inspiring — a chance to watch field practitioners think, debate, and listen to one another, all out of a sense of service to the larger field. Indeed, the panel process is in itself a form of professional development for us as well as for the panelists, providing new insights and perspectives on field issues, grants initiatives, and the arts themselves, and we have yet to conclude a panel meeting without finding our own ideas and priorities challenged and gaining a sense that we have learned something new. The chance to be in the same room as leaders find their way to consensus is one of the great privileges and blessings of our careers. And now as we examine our role in promoting equity, diversity, and inclusion, we find the role of panels especially valuable — a way of expanding the communities and perspectives in the decision-making process and redistributing both money and power.

Yet even as we are committed to such redistribution, we have recognized that significant power is retained by the grantmaker who chooses the panel itself. The composition of the panel — whether consciously or unconsciously — is typically shaped by our own values, frames of reference, contacts, community(ies), and experience — a set of lenses that may limit our maximum effectiveness, especially in a time of rapid change.

This has always struck me, at least, as an inevitable piece of the panel system. Someone (or some group of staff) needs to take charge of structuring the panels, recruiting the panelists, and insuring that those assembled will have credibility not only with a board of directors but also (if the panel’s identity is to be public) the field. If there was a different way to think about this, after thirty years, I for one had yet to see it.

For those who have not yet come to know her, Gina Gibney is a celebrated choreographer based in New York City whose work has embraced both aesthetic innovation and exploration of social issues, including domestic violence. In 2010, her organization, Gibney Dance, opened an expanded choreographic center at 890 Broadway, offering subsidized rentals to nonprofit dance organizations and choreographers. The success of this center led to her leadership in the rebuilding and reanimation of 280 Broadway, overseeing a capital renovation and creation of a space offering classes, work space, and presentations of dance. In these efforts, Gibney Dance saw its role less as a presenter than as a service organization and as an advocate for the larger dance field.

As 280 Broadway prepared to open, the organization launched research about what needs were most urgent in the New York dance community(ies) and what the organization itself might be uniquely poised to offer. A Dance in Process residency program, funded by the Andrew W. Mellon Foundation, grew out of these efforts. This program offers intense residencies of three consecutive weeks to twelve different midcareer artists who are midprocess in creating a specific work and in need of an immersive experience. In creating the program, collaborators determined that two of the twelve residencies would be determined by partner presenters (651 Arts and BAAD! in the current year), while Gibney Dance would bear responsibility for determining the other ten recipients.

Such responsibility raised significant questions: How could Gibney Dance keep its ethos as a community organization and at the same time make selections about who would be supported and who would not? How would being a decision maker alter and perhaps damage the myriad relationships the organization already had? Would this undermine Gibney Dance’s own core purpose, values, and mission? Realizing that it could be both undesirable and inappropriate for Gina or her organization to be the sole decision makers, Gibney Dance began to consider a potential solution to these challenges.

Before committing, however, the organization sought further feedback from artists themselves about panel processes. For many, the panel process was opaque at best. Panels were viewed by some as insider groups with an unspoken bias or aesthetic: applicants often did not understand why particular panelists had been chosen or how the applicants themselves might position themselves to serve on a future panel. Many had difficulty reconciling review criteria with panel decisions and found feedback, when offered at all, often elliptical and vague. But despite these limitations, panels at their best, Gibney Dance heard, embraced diverse voices to participate in selection of beneficiaries/grantees, reinforced the values of the larger dance community, and promoted diversity and inclusion in reaching decisions. Panels also advanced broader awareness of and participation in programs, as panelists became ambassadors within their communities or even became applicants themselves after serving. Even those who expressed significant dislike of anonymous panels or occasional lack of respect for the panelists whose identity was publicly disclosed generally appreciated the merits of panels as a way of establishing credibility, opening and democratizing the process, and creating greater transparency.

Gibney Dance asked itself whether there were ways in which these merits could be retained while correcting these concerns. After a period of significant discussion, the organization decided to allow the applicants themselves to nominate and elect the panel.

Applications in the Dance in Process program are limited to the first one hundred applicants on a first-come basis. Each applicant is required to identify three individuals with at least ten years of professional experience (either as an artist, funder, presenter, administrator, or combination of these) that she/he/they would like to see on the panel and provide appropriate contact information. Self-nominations, nominations of those who have already served for three years, and nominations of Gibney Dance staff are not allowed, and nominees submitted by an applicant who suggests fewer than three in total are not moved forward. Staff contact all eligible submitted names to see whether they would be willing to stand for election. The ballot is then created, each applicant votes for one panelist of her/his/their choice, and the panel is determined.

Gina admits that there have been surprises with this approach. With the passage of time, the balance of the slate of nominees is shifting as artists nominate more and more of their artistic peers (rather than administrators or funders) for service. Many arts professionals whose lives involve making selections and decisions about others are not themselves willing to be voted on. Professionals who agree to stand for election but are not chosen can on occasion be prickly and present challenges for Gibney Dance in managing those relationships in the future. But on the positive side, those who are chosen implicitly feel a different kind of pride of service, have a deeper respect for fellow panelists, and perhaps serve with even greater diligence. A significant number even offer themselves to be of service to applicants — not just grantees — after the panel process.

Recently, applicants chose a panel that did not reflect Gibney Dance’s own professed values of equality, diversity, and inclusion, with only one member drawn from ALANAA communities. This understandably provoked intense reflection: could/should/would the organization stand behind a panel that in its composition would not reflect the organization’s higher commitment to diversity? Having positioned this as a democratic process and having promised applicants the ability to choose the panel, was the organization compelled to stand behind the results, regardless of what those results were? What would be the implications for the relations with the community(ies) if this panel returned a grants roster that was not in itself diverse? Would the organization be prepared to override the panel in some way?

To some degree, Gibney Dance recognized that the choice of presenter partners determining two grantees (the examples of 651 and BAAD! offered earlier) could help expand the roster if the panel’s results were less than robustly diverse. Additionally, the panel would be asked to identify ten participants, while the Gibney organization itself would determine the final participants — an additional opportunity for the organization to think more curatorially about the composition of the cohort of grantees as a whole, complementing, amplifying, or balancing the work of the panel. With this structure in mind, the organization took a deep breath and decided to stand by the results of the vote, using the panel chosen by the applicants. The results of the panel deliberations were in themselves cheering and represented a far wider spectrum than the composition of the panel itself: the recipient artists include eight women, one physically disabled artist, and six ALANAA artists.

Gibney Dance sees panels as a work in progress. Applicants are now encouraged to think deliberately about issues of diversity as they propose their roster of nominees and submit their votes. Gibney Dance wonders whether asking applicants to vote for a cohort of panelists rather than casting single votes might produce a more diverse panel, while helping applicants appreciate the dynamics of the panel process — the determination of a roster — more deeply. The organization is curious about how the final voting might disadvantage applicants whose particular aesthetic or tradition is represented by only a small number of other applicant electors. The shift from more traditional “gatekeepers” in administration in presenting to peer artists could undermine a traditional value of panels in helping presenters discover new talent — a shift that is perhaps less consequential for these midcareer applicants but might have a different impact in programs for early-career artists. And knowing how one can find solace in rejection if one perceives the panelists as inept, unqualified, or unfamiliar with their work, Gina herself wonders whether artists might not feel rejection even more intensely in cases where they have helped select the panel based on their expertise and knowledge of the field — a question leading to further reflection about how applicants receive feedback and whether applicants should be asked to define the kind of feedback they would ultimately want, recognizing that some may want no feedback, while others may be especially curious about particular issues or aspects of their work.

Since I began this article, I have become aware that others are taking this approach — most notably in Seattle — and I apologize to them for not reaching out to them to learn more. I hope that they will weigh in about what they are learning as well. Clearly these conversations will continue as many of us try to always improve what will always be an imperfect process. But engaging these questions — as Gina Gibney and Eleanor Savage and Ama Codjoe, writer and editor, respectively, of RE-Too: Racial Equity in the Panel Process, have done — should position us all to be more intentional, more thoughtful, and more responsive as we move forward in this important work.

Gina Gibney is a choreographer, director, entrepreneur, and CEO & artistic director of Gibney. She founded Gibney in 1991 as a socially active dance company. The organization has since emerged as a two-location performing arts and social justice powerhouse dedicated to tapping into the power of movement to effect social change and personal transformation.