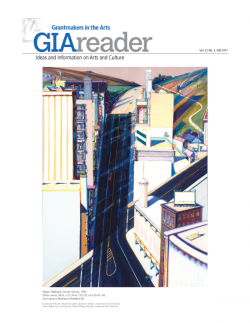 A four-year partnership between Atlanta-based Alternate ROOTS and West Baltimore–based CultureWorks flowered forth in ROOTS Fest 2011, presenting a new model for arts-based social justice work and engaging a wide array of artists, funders, and activists, locally, regionally, nationally, and internationally. This art-packed, heart-grabbing, justice-probing double event began with the three-day National Learning Exchange at the Bluford Drew Jemison STEM Academy in West Baltimore. The scene then shifted to a two-day blow-out-all-the-stops festival of music, visual arts, performances, food, and hula-hooping along the grassy borders of the “Highway to Nowhere.” This failed federal highway project sliced through several vibrant, predominantly black neighborhoods in the mid-1960s, displacing thousands of residents only to grind to a halt after 1.5 miles. The highway has been a wounding dividing line since then, but the festival events aimed at inspiring unity and revitalization.

CultureWorks is a community-driven social change organization founded in the conviction that art and culture transform communities. It was formed to reunite the neighborhoods separated by the Highway to Nowhere and spark new visions of West Baltimore as a place with great history, unique physical structures, and art. ROOTS and CultureWorks came together to celebrate, learn, and create a space for people from all communities to make art, tell their stories, and share information.

The National Learning Exchange, organized by Alternate ROOTS and facilitated by Anasa Troutman and her Art Is Change team, rolled out an exciting new model for advancing arts-based social justice work. Each of the three days combined professional, community-based, and participatory arts interspersed with interactive discussions in large-group, small-group, and open-space formats. “I wanted to transform our conversations into tangible experiences.” Anasa told me. “To encourage participants to straddle the lines between the technical and the creative, strategy and innovation, the intellectual and the practical, and to create spaces for participants to experience the embodiment of the conversations they were having, both as observers and active participants.” This innovative model inspired discovery, deep reflections, and collective learning.

Each day had a theme and began with exchanges with West Baltimore leaders and artists to keep participants focused. People met for discussion starters, witnessed stunning performances, and took part in artmaking, all before lunch! The afternoons offered small-group discussions, more performances, and open-space gatherings. Each evening also featured performances.

It may sound exhausting, but I found it inspiring. The healing theme on day one, for example, at first seemed a little too up close and personal and, heaven forbid, therapeutic. But the conversation starters talked about healing not as fighting disease but as finding individual and community health and balance. They spoke about the wounds and heartbreaks of everyday life, especially when working for change. So, as I watched the powerful performances and talked over lunch and in small groups, I asked myself why the word healing made me uncomfortable in the first place, and how could those working for social justice not talk about healing?

Day two’s theme of intergenerational leadership demonstrated the importance of focusing on healing first. As a baby boomer, I have seen many discussions of leadership transition derailed by hurt and anger on both sides. So healing is a key to intergenerational cooperation. Members of the Youth Activist Leaders Cohort proved this point by their respectful interactions and healthy ways of talking about generational differences. Standout performances on this theme included I’ll Remember for You, Jump-Start Performance Company’s poignant portrayal of a mother with Alzheimer’s disease and her caregiving daughter; and Daughters of the Cane, Millicent Johnnie & Company’s incredibly beautiful dance tribute to the history carried in our bodies.

Sustainability, the final theme, asked us to consider our art and social justice work over the long haul. The conversation starters underscored the importance of partnerships, collaborations, and relationship building. Piercing performances in the morning and afternoon spoke deeply to me about the joys and challenges of collaborations: Driven by the Female Heart by Clancyworks Dance and an excerpt from Go Ye Therefore by New Orleans-based ArtSpot Productions. The exchange ended and the festival began by celebrating the thirty-fifth anniversary of Alternate ROOTS with birthday cake and a stage full of founders and staff.

ROOTS Fest 2011 transformed the Highway to Nowhere into a high-energy venue, with four stages and several tents, featuring Baltimoreans, Alternate ROOTS artists, and performers from all over the nation and the world. My list of favorites begins with spoken word/music/performance artist Sunni Patterson on the main stage. Originally from New Orleans and now based in Houston, Patterson spoke and sang from her heart about the challenges facing all of us today and finding the hope and community to transcend those challenges. In a more intimate performance tent in a newly christened neighborhood park, East Tennessee writer Jo Carson performed a delightful stage reading of her new play A Tale of Two Charlies, part history, part folklore, part Appalachian tall tale. Knoxville, Tennessee–based Carpetbag Theatre presented Speed Killed My Cousin, a new work about two generations of veterans coping with life after combat. Got Zulu, a South African group, sang and danced as if they never wanted to stop.

ROOTS Fest 2011 provided five days of insights, laughter, respect, inclusivity, achingly good art, mind-stretching conversations, and deep consideration of major social justice issues facing us all. It was a great celebration, but it was a lot more. CultureWorks will follow up with cultural organizing strategies to produce tangible results in West Baltimore. And all participants working to fuse art and social justice for transformative change have a new model for learning and powerful inspirations for action.