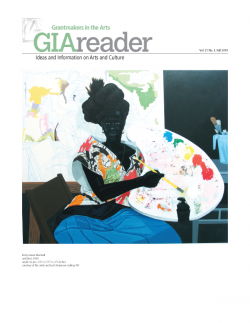 Foundation Grants to Arts and Culture, 2008

The Great Recession resulted in a 17.2 percent loss in foundation assets in 2008 and an estimated 8.4 percent reduction in 2009 giving — by far the largest decreases recorded since the Foundation Center began tracking all US foundations in 1975. An analysis prepared by the center for the summer 2009 GIA Reader suggested that the arts would experience changes in funding in 2008 and 2009 roughly proportional to the overall changes in foundation giving. This prediction held true based on 2008 funding. (See below for a detailed analysis of 2008 foundation giving for arts, culture, and media.) Complete data for 2009 are not yet available, but the expectation that foundation arts funding will not be disproportionately affected by the downturn remains in effect.

The Foundation Center offers these key findings from GIA’s ninth snapshot of foundation giving to arts and culture. The definition of arts and culture used for this snapshot is based on the National Taxonomy of Exempt Entities and encompasses funding for the performing arts, museums, visual arts, multidisciplinary arts, media and communications, humanities, and historical preservation. Most important, the findings tell us about the changes in foundation giving for the arts between 2007 and 2008 by a matched set of 493 funders 1 and the distribution of 2008 arts and culture giving by a larger sample of 1,490 foundations. They are based on all arts grants of $10,000 or more reported to the Foundation Center by these sets of the largest US foundations, hereafter referred to as “the sample.” 2 The center has conducted annual examinations of the giving patterns of the nation’s largest foundations for more than three decades.

Foundation funding for arts and culture rose nearly as fast as overall giving in 2008. Arts funding increased 6.4 percent between 2007 and 2008, compared to a 6.6 percent rise in overall giving by these foundations. This growth in arts grant dollars also surpassed six of the nine other major funding areas — five of which experienced reductions in giving: education, human services, public affairs/society benefit, science and technology, and the social sciences.

Large grants represent close to two-thirds of all grant dollars. Large arts grants of $500,000 and more captured nearly 64 percent of total grant dollars for the arts in the 2008 sample, up from roughly 54 percent in 2007. They are concentrated in a relatively small share (4.3 percent) of the total number of grants.

Top arts funders accounted for a larger share of overall giving. The top twenty-five arts funders by giving amount provided 39.9 percent of total foundation arts dollars in 2008, up from 34.3 percent in 2007. Nonetheless, the share of arts giving accounted for by the top funders remains well below the more than 50 percent shares recorded in the early 1980s.

It is important to keep in mind that the foundation grantmaking examined here represents only one source of arts financing. It does not examine arts support from earned income, governments, individual donors, or the business community. This analysis also looks only at foundation arts support for nonprofit organizations, and not for individual artists, commercial arts enterprises, or informal and unincorporated activities. In addition, the analysis of changes in giving between 2007 and 2008 is based on a matched subset of 493 funders, while statistics on the distribution of funding and actual dollar amounts and numbers of grants are based on the full set of 1,490 grantmakers included in the Foundation Center’s 2008 grants sample (see note 1).

Overall foundation dollars for the arts. The 1,490 larger foundations included in the Foundation Center’s 2008 sample awarded 22,902 arts and culture grants totaling $3.2 billion, or 12.5 percent of overall grant dollars (figure 1). Arts giving rose 6.4 percent between 2007 and 2008, nearly equaling the 6.6 percent increase in grant dollars overall. (With an inflation rate of close to 4 percent, this reflected a real overall increase of 2.6 percent and 2.4 percent for arts giving.) Among the nine other major subject areas tracked by the Foundation Center, only the environment, international affairs, and health showed faster growth during this period. Moreover, five of the areas registered declines in grant dollars: education, human services, public affairs/society benefit, science and technology, and the social sciences (figure 2).

The impact of exceptionally large grants. Every year and in all funding areas, a few very large grants can skew overall totals, creating distortions in long-term grantmaking trends. In 2008, twenty-six arts and culture grants totaled at least $10 million, and instances where these grants had a notable impact on grantmaking patterns are identified in the following analyses. Yet despite the potential fluctuations caused by these exceptional grants, Foundation Center data in all fields have always included them, providing consistency over time. (In addition, the Foundation Center provides statistics based on share of number of grants, which are not skewed by exceptionally large grants.)

Funding for museums accounted for just over one-third (34 percent) of all foundation arts dollars in 2008 (figure 4), surpassing the share reported for the performing arts (30 percent). From the start of the 1980s until 1998, the performing arts consistently received more foundation support than museums. However, museums have surpassed the performing arts by share in several recent years (1998, 1999, 2001, 2004, and 2005). More study would be needed to adequately understand the underlying reasons for the shifts in share between these two fields of activity, for example, the entry onto the scene of new and large arts funders, extraordinarily large grants, the contribution of valuable art collections, and new capital projects at museums.

Giving to museums. Grant dollars allocated to museums increased by 8.3 percent between 2007 and 2008. However, the number of grants they awarded slipped a marginal 0.4 percent. The 1,490 foundations included in the full sample awarded 4,849 grants totaling $1.1 billion for museums in 2008. Among museum types, more than half of funding (53.1 percent) supported art museums.

Giving to media and communications. Support for media and communications 3 represented 12.9 percent of arts funding in 2008, up from 9 percent in 2007. Grant dollars rose 17 percent in the latest year. Accounting for much of this growth was the largest arts and culture grant tracked in the 2008 sample: the Packard Humanities Institute’s $155.5 million award to the Architect of the Capitol in Washington, D.C., in the form of a film archive and conservation facility.

Giving to the humanities. Funding for the humanities 5 reached 5 percent of arts grant dollars in 2008, up from just under 4 percent in 2007. Support for the field more than doubled during this period. 6

Grants by Types of Support

An important caveat to a report on the allocation of foundation dollars by specific types of support is that for roughly 23 percent of arts grant dollars in the 2008 Foundation Center sample, the type of support could not be identified. This means that modest differences in percentages — that is, variations under 10 percent — may not be reliable. (The grant records available to the Foundation Center often lack the information necessary to identify the type of support. For example, it is often the case that the only source of data for this sample on foundations’ grants is the 990-PF tax return, and this tends to be less complete than other forms of grant reporting.)

The arts compared to other foundation fields of giving. The three largest categories of support tracked by the Foundation Center are program support, capital support, and general operating support. Of these, special programs and projects typically receive the largest share of arts and culture grant dollars and grants. In fact, the same is true in most of the major fields, such as health and education, where program support consistently accounts for the largest share of funding.

Capital support accounted for the second largest share of arts grant dollars in 2008 (32.5 percent). Grants for capital support are larger on average than awards for program and general operating support, and exceptionally large capital grants can have a pronounced effect on the distribution of funding by type of support. In fact, arts dollars allocated to capital support have fluctuated more than arts dollars to the other two primary categories of support: in 1986 the share allocated to capital was about 44 percent; in 1993 it was about 30 percent; and in 1999 it was about 41 percent. (In general, the share of capital support is highest in periods of strong foundation asset growth.)

The shares of grant dollars and number of grants allocated for general operating support in 2008 were higher for arts and culture (27 percent and 32.4 percent, respectively) than for all but one other field (public affairs/society benefit). Moreover, the portion of grant dollars allocated to this type of support has risen markedly over the past two decades; operating support represented only 13 percent of arts funding in 1989.

Arts grants by specific types of support. Table 1 provides a breakdown of more specific types of support within the larger support categories and lists both the specific dollar value and number of grants made in each type. As with all data in the “Snapshot,” it is important to keep in mind that this table includes only grants of $10,000 or more awarded to organizations by a sample of 1,490 larger foundations. It is also important to note that for close to 23 percent of the arts grant dollars in this sample, the type of support was not specified.

Median grant size. The median or “typical” grant amount 7 for arts and culture in 2008 was $25,000, which nearly matched the median amount for all foundation grants ($25,275). This amount has remained unchanged since 1993. If this amount were adjusted for inflation, however, it would have lost value in real dollars. More study would be required to determine whether the unchanged median means that foundation arts grants simply are not keeping pace with inflation, or whether, in combination with the increased number of grants, it means that foundations are choosing to distribute funds more broadly to a larger number of recipients.

In addition to the $155.5 million grant from the Packard Humanities Institute to the Architect of the Capitol (noted earlier), examples of other especially large grants in the 2008 sample included the Walton Family Foundation’s $60 million in support for the Crystal Bridges Museum of American Art in Bentonville, Arkansas; the Freedom Forum’s $57.3 million in continuing support for the Newseum in Washington, D.C.; and the American Art Foundation’s $25 million grant to the Whitney Museum of American Art in New York to promote the activities of the organization.

Steven Lawrence is the Foundation Center’s director of research.