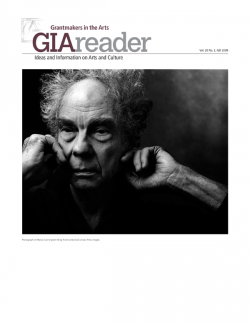 This keynote speech was delivered by choreographer Margaret Jenkins at the Dance/USA Annual Conference in June 2009, in Houston, Texas in a session titled “Finding the Future: Creative Sustainability in Uncertain Times.”

Originally a nautical term, battening down was a procedure to safeguard ships against bad weather. The crew would prepare for an impending storm by fastening canvas over doorways and hatches. Now in the arts, it is a time to take a few deep breaths and batten down the hatches.

The severity of today’s climate compels us to pay attention and prepare for trouble, while at the same time demanding that we stay focused on our mission. We must both reignite our determination to continue and revive our commitment to taking risks. We must hold on to our artistic visions so that good work and good people will not vanish. And we must not fall prey to the pressures suggesting that success is predicated on growth.

Although we might need to secure our property—our art—with protective sheeting, we must remain mindful that the way that good and provocative art gets made is to go deeper without much protection. We have to embody not knowing and accept that these unpredictable winds might take us to uncharted and unexplored territories.

In my almost fifty-year career in dance, from high school to Juilliard, then UCLA, New York and Europe, the Bay Area and South East Asia—teaching, and making work, and creating programs for the field, I have had to take cover many times, to shift where I dock and alter how I dock.

I have been luxuriously supported in dance, and I have been supported not at all. I have had a full-time company, a part-time company, no company and, currently, a project-oriented company. I have toured around the world. I have stayed home, I have made new work every year. I have made new work every three years. I’ve collaborated with an extraordinary array of artists including dancers, composers, writers, and visual designers and I’ve gone to Goodwill for costumes and to my CD collection for music many times.

In the seventies I paid nothing to dancers for rehearsing; eventually a performance here or there earned us $25. We and others performed weekly in my studio à la the early DTW (Dance Theater Workshop) days: a few cans for lights, some soft cushions for chairs. In the late seventies and early eighties, the dance boom offered regular touring and the Company was a recipient of many grants, commissions, and performances at many wondrous places. We toured around the US, and the Company was on a forty-four-week contract until 1993. I owned my own space, had a full curriculum of classes, and a theater in which many others and I performed. I have received numerous awards and have been overlooked any number of times.

What I have witnessed:

In preparation for this presentation, I talked with funders and artists in California, which is in a tumultuous condition at best: San Francisco must cut its arts budget by a minimum of 24%, that most foundations will be reduced by at least 10–22%, and that private donations have dropped by 15%.

I realize it is hard to think of the current and projected cutbacks as anything other than the “sky is falling.” But one has to use this crisis as a time to reassess, re-imagine, re-focus and realign. For those of us who have been through these sea changes in the past, prosperity and adversity both look like opportunities: to experiment, court chance and be cautious. We must stay at it—hold on tight, but not so tight that there is no room for something miraculous or unexpected to enter the scene.

The news today, and it will continue for a while, is at once shocking and “what else is new?” Disheartening—yes, but surprising—no! Dynamic adaptability, as John Killacky says, has to be a constant.

In 1996 I saw the then-invisible handwriting on the wall. I shifted my Company to a project company. I went to other countries to dig deeper into my vulnerability and to see what I could learn past just keeping on: Japan, India, Eastern Europe and currently China have become my through-line, making work across borders my thread. My new cross-cultural work, Other Suns, with the Guangdong Modern Dance Company of China, premieres this fall and has a four-week tour thanks in part to the National Dance Touring Project.

CHIME, my choreographic mentorship program, has become a place for dialogue, for creative exchange, for building community, for staying focused on the exciting and evocative issues of being an artist. There is no time for the litany of complaints that can so often derail us from the making of art, the keeping on, the identifying and solving of perceived problems.

Most dance artists of my generation never had support. They might as well have been children of the Depression; they were used to living with many, working three jobs, as well as juggling dancing with many companies. You stayed put—to work and devote yourself to an aesthetic you found compelling. No need to move to another company for better wages.

But there are those who have not survived our culture’s demeaning relationship to the arts, who have quietly and sadly stopped or moved to other countries—battened down their hatches and sailed away.

In addition, the numbers of MFA and PhD candidates in universities are up dramatically. Dancers’ Group in the Bay Area, our service organization, boasts at least one hundred individuals to whom they are a fiscal sponsor and literally hundreds more who avail themselves of their services.

There were 740 applicants to the Multi-Arts Production Fund (MAP) this year, an increase of 25%. Our field is healthy with people at work.

Although there were a few brief years that produced and held the promise of increases in salaries and renewed year-long contracts, the dancers of my Company once again dance with at least three companies, work at least two other jobs, share apartments with many, and continue, as in the seventies, regardless of the lack of recognition or consistent work.

We’ve learned from earlier crises and are now better able to negotiate our way through times of upheaval. Trying to sustain what we have been doing is not the answer, but reassessing our mission is. We have to do less and make it more.

Einstein was one smart fellow when he said that the “definition of insanity is doing the same thing over and over again and expecting different results.” We must think, act, and work differently once again.

So, I point out some of these cycles from the vantage point of someone who has been around for a bit. It isn’t so much that “I have been there, done that” and therefore have no interest or concern with what is going on now, but many of my generation have had multiple experiences with this ebb and flow, and we hold stories of recovery. I have felt disillusioned, marginalized, invisible, but also, and sometimes at the same time, substantially respected, honored, inspired, and, finally and always, fortunate. Moreover, we know not to be fooled by the decoy—the decoy of visibility, recognition, or support. Those are ephemeral at best. The doing must be of necessity and its own reward.

I have adapted, and to some degree consolidated, and I will admit that I have recently shifted to gin when pouring “water” into the half-full glass. But I keep on for the fleeting moments of feeling alive, as Merce Cunningham would say, for the privilege of being able to do this with my life, for the profound entrée into another way of living, of seeing the world, for getting to dive head-, heart-, and body-long into my vulnerability and in so doing be lifted upright and thrust forward, with a deeper understanding and sensitivity to everything around me. We have to learn to surrender to not knowing and to accept and live in the complexity of these moments.

Of course, the minute one says “you should do X and not Y,” “cut back” or “consolidate,” someone emerges and thrives doing exactly the opposite. There are always those who will surprise and present alternatives, the exceptions to any rule. If you look closely at those who are surviving, or bucking the trend or predictions, notice who is at the helm. I feel strongly that we are a field of visionaries and warriors, and that the capacity to continue has everything to do with leadership. If we pay close attention to the survivors, there are lessons to extract, to apply to our own situations. Their collective tenacity, optimism, and determination can serve as a guide and a reminder.

Whoever is to blame for where we are now, the end result is that art, especially dance, is not a part of everyday American life, and it’s up to the artists to remedy the situation. Tony Kushner has said: “When you don’t act, you act; when you don’t vote, you vote.” Dance artists have to be proactive; find new ways to make money; insist on being paid for their expertise and knowledge; and continue to reach out to potential audiences for support, for renewal, for affirmation.

When we feel like we’ve tried everything and have culled from the resources within ourselves, that we’ve squeezed every drop of blood from every available stone, we can take heart in how the world sometimes changes around us for the better. I sense hopefulness, a kind of promise—that a suffocating feeling has abated. We have a pretty incredible opportunity in America right now, one that was not available just a year ago—a government that seems to be listening in a different way. As we tick off the changes over time that stifled creativity and made our days more difficult, we must acknowledge that we had a horrible government for eight years that waged various consuming wars, both cultural and military, at home and abroad. We have to work harder now to make the world interested in what we are doing, and we have to be more interested in what the world is making. And finally it looks like we may have elected an Arts Partner in Chief, someone who will reach out and let in some air.

The sustaining mantra of many in the field is that they did not choose to be dancers; it is a necessity, like breathing. We just need a little oxygen to continue the journey.